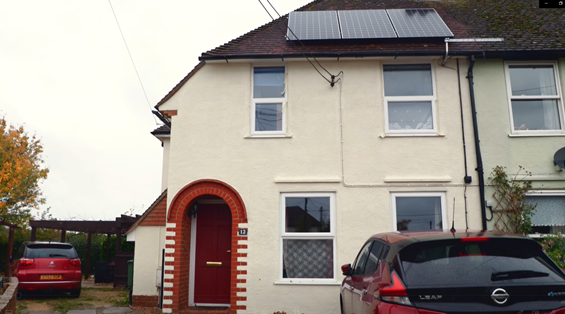 We recently completed work on retrofitting a semi-detached home in Didcot, Oxfordshire, including replacing a fossil fuel boiler with an Air Source Heat Pump to improve comfort and reduce carbon emissions.

In this post we’ll give a summary of the work, but you can also download the full case study as a PDF or watch a video of their home transformation below.

Heather and Paul’s home is a 1930s/40s semi-detached property in East Hagbourne, Didcot. It has a modern two-storey extension built in 2012, where the kitchen and master bedroom are.

When the property was initially assessed it was found to have cavity walls and suspended timber flooring, meaning there was the potential for a lack of insulation to cause heat loss. The home was heated with a combi-gas boiler, meaning there was a reliance on fossil fuels to provide heating.

Motivations for the retrofit

One issue which caused particular concern with this home was the black mould which would sometimes form in the master bedroom between the walls and the sloped ceiling, suggesting that there was a condensation issue, likely due to a lack of insulation. Addressing this would improve the health and comfort of the home whilst also reducing energy loss and carbon emissions.

The homeowners were also particularly interested in exploring whether a heat pump was an option for them. Their existing combi-gas boiler meant that temperatures across the home varied, and rooms would often be cold in the winter. Switching to a heat pump could offer a constant, comfortable temperature in every room all year round.

Alongside this, carbon emissions were the key driver for the family. Both Heather and Paul are committed to reducing their environmental impact as much as possible. They already had 10 solar panels installed on their roof, as well as a Tesla charging point for their electric car. Retrofitting their home would help to further cut their carbon footprint.

What measures were installed?

The main measure was to replace their fossil fuel boiler with an Air Source Heat Pump, offering a low carbon method to heat their home which also maintains a constant, comfortable temperature – avoiding the fluctuations common with gas boilers.

This meant removing the existing boiler and installing the heat pump on the outside of the home. Although underfloor heating is common with heat pumps, in this case the homeowners decided to use their existing radiator central heating and hot water tank to distribute heat around the home, and so the heat pump was connected to this equipment.

Heat pumps work most effectively when a home is well insulated, ensuring minimal heat loss. So, alongside the heat pump installation both roof and cavity wall insulation were increased. This also addressed the issue with mould in the bedroom, improving insulation and therefore reducing the condensation which caused the mould.

Get your free draft retrofit plan

Curious about what home retrofit could do for your home’s energy bills and carbon emissions? Get started by using our Plan Builder to create a draft home retrofit plan, and then submit your plan to our team to start the Cosy Homes process.

Get started with your retrofit today
© Cosy Homes Oxfordshire 2022 All rights reserved
For a better viewing experience we recommend you upgrade your browser.